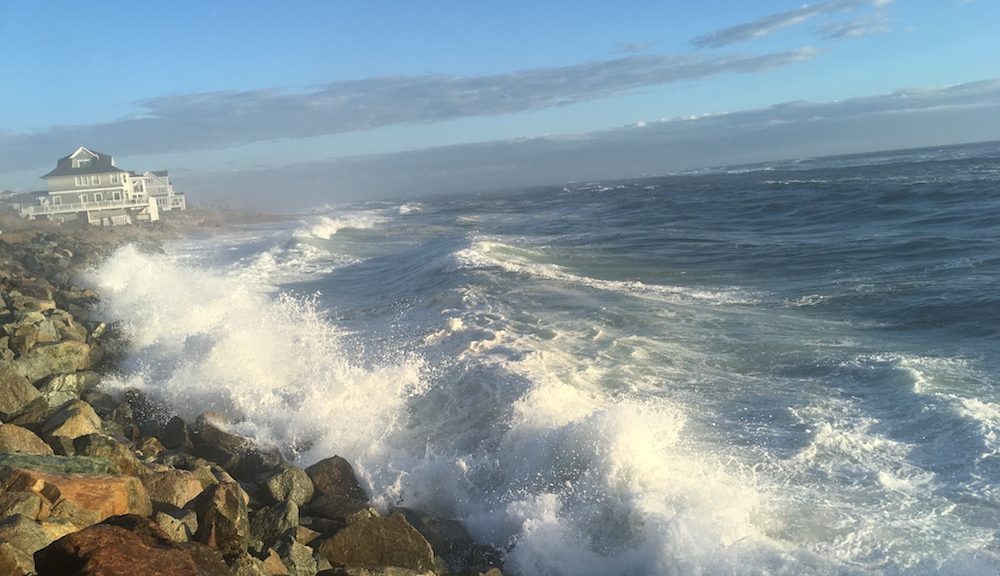 In the fine tradition of big-ass North Atlantic storms around Halloween (see: the so-called “perfect storm” of 1991; hurricane Sandy, 2012), New England got hit by a doozy of a tempest this past Sunday night, Oct. 29. Spawned by the atmospheric marriage of the remains of tropical storm Phillipe and a cold front moving off the mid-Atlantic coast of the U.S., Sunday’s night storm brought ferocious winds and heavy rains to the northeastern part of the country — including my snug-and-cozy domicile on the quaint little sand dune known as Plum Island.

Oh, baby! Did it blow Sunday night! We had a storm back in March — a standard winter nor’easter — that delivered official winds as high as 77 mph and was as impressive as any I’d ever seen at Plum Island, but Sunday night’s storm was different. For starters, in this storm the wind came out of the east-southeast. That may not seem like a big deal but my home is aligned northeast-to-southwest, so the wider side of of the house bore the brunt of Sunday night’s winds. And those winds, while less than March’s winds — highest velocities were in the 60s — were sustained for several hours, prompting me to actually start to wonder if something major was going to happen to the house. I had fears of the solar panels getting yanked off and taking the roof with it, or the decks (which my brother is currently rebuilding) blowing down, or windows caving in, or…

In the end, we had it pretty easy. The extent of the damage was limited to leaks on the windward side of the house and a bunch of shingles on the newly repaired roof being torn off. The former occurred in areas my brother and I had earlier this autumn identified as needing replacement so there was no surprise there, while the latter is covered by the manufacturer since they were just installed a month ago. So…no big deal. Hell, our electricity didn’t even blink.

But driving around the following evening (Monday being hockey night, after all), the damage was pretty amazing. Heading into Newburyport, the opposite side of the Merrimack River was eerily dark as Salisbury remained without power. And several other towns in Essex County were not only still dark but trees were down everywhere, several roads remained closed and crews were still at work clearing debris off power lines. Hockey went on as scheduled (whew!) but two days later there remains a lot of work to be done. Apparently, some 300,000 people in Massachusetts were without power for various lengths of time (some remain without power through Wednesday). Up in Maine, many places are also still without power. And there is plenty of damage to both property and forest throughout New England.

And another thought occurred to me as I lay awake Sunday night between 3 and 4 a.m. during the peak winds: our winds, while certainly fierce, were less than half what Barbuda, St. Martin, Dominica, the BVIs and Puerto Rico (and other places) endured during hurricanes Irma and Maria — and those places had those incomprehensible winds for the better part of a day, not just a few hours. (Our storm was moving at 50+ mph when it hit New England so it blew right through; those hurricanes took their damned sweet time as they obliterated those islands.) So while I was feeling humbled as I listened to the wind and felt the house shake, I knew I had it pretty damned easy. (And one other, somewhat related thought occurred to me also: the thought of being at sea in such winds — an uncommon though not rare event — was frightening. But that’s something I’ll have to worry about later.)

Of course, I did get to enjoy some benefits of the storm. The waves kicked up Sunday night were quite large on Monday — too large to venture into until Monday afternoon, and even then it was 100 percent ludicrous as the winds, now blowing westerly or offshore, were still steady in the high 30s, so the currents were crazy and getting into a wave was damned near impossible. But venture out I did, and I stayed for two whole waves before I pulled the chute. Tuesday saw much smaller but still fun longboard waves, which I enjoyed for a couple of chilly hours. The Atlantic is cooling down…

Just another autumn in New England.