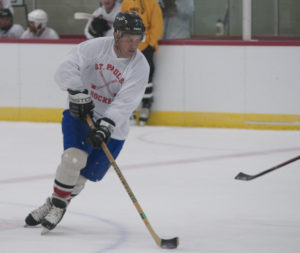 Is it the hockey itself, the playing, that made my Friday evenings the highlight of my winter? Was it the camaraderie in the locker room and on the bench, a bunch of men (and a couple of women) ranging in age from teenager to 60-something all gathered for the common love of a game? Maybe it was simply the winding drive through the rolling forests and swirling creek bottoms of southeastern New Hampshire, the New England farmhouses with their white siding and green shutters peeking through the trees.

Whatever it was, getting involved with the Friday-night skate at a local prep school was the one part of each week that was inviolable. But with the end of scholastic hockey season in early March (while I was celebrating my birthday by surfing in Mexico), the school had shut off the rink’s compressors, putting an end to my weekly sessions. I was bereft. What was I to do? Like a junkie going through withdrawal, I’d begun to hallucinate upon my return from Mexico.

I’ve written before of the joy I take in playing hockey, the pure Zen I experience when I’m on the ice. And every winter — save one: the year I lived in Austin, Texas — since I started playing the game in 1971 I have played hockey. Even San Diego afforded me the chance to skate regularly and achieve temporary satori.

Fortunately, I recently connected with another group that has doubled my weekly hockey dose. The new group skates twice a week at another local prep school, this one about a half-hour south of my home and reached by taking an even more scenic drive through quaint, picturesque New England towns than my winter drive north. We play later in the evening so the late-night drives home through those sleepy — and sleeping — towns scratches my Robert Frost-induced Yankeephile itch. And while the competition is not as strong as the winter skate, it’s still solid and challenging, and there are always two goalies — a rare occasion in the pick-up skates I had been attending to fill the void.

I don’t know how far into the spring or summer I’ll skate with this group, but the instant community that engulfed me once the puck was dropped my first time out and I could show what I was capable of has been comforting to this curmudgeonly hermit. As an added bonus, the workouts (and their timing) has helped me keep off the weight I lost in Mexico. And then, of course, there are those fleeting glimpses of nirvana when my blades hit the ice with each shift…