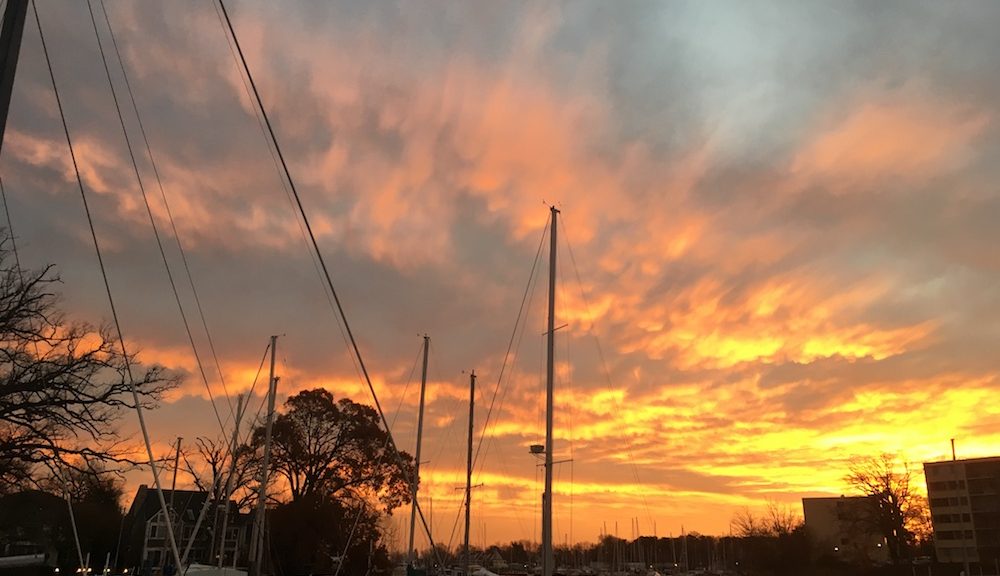 Annapolis, Maryland, is a neat little city. Its downtown core — home to the U.S. Naval Academy, the state capitol and the city’s waterfront — reminds me a lot of Newburyport, Mass. Both cities share a rich maritime history, both are laid out in red brick and both have great ice cream stores (well, Newburyport used to).

The only difference is that Annapolis is much bigger. That, and the ocean is a two-plus-hour drive from here (many, many hours by boat), unlike Newburyport which is right on the Atlantic. If Naptown (as it’s known) was on the ocean, I’d have moved here a while ago. Why? Well, Annapolis is also the yachting capital of the country. Newport, R.I., sometimes makes that claim due to having hosted the America’s Cup for so many decades, but there is so much more sailing-focused business and activity here in Annapolis that Newport might as well be in a field in Kansas.

Annapolis is also where my boat, Further, and I are currently located. And it’s my location that is the major quandary perplexing my brain these days.

I purchased Further in mid-November, too late to take her back to New England since all the marinas had already pulled in their docks and packed every square inch of land with boats on stands for the winter. That didn’t bother me too much since it’s just an 7.5-hour drive between Naptown and Plum Island and I could get back and forth relatively easily (although I will say that I am WAY over that drive at this point). I figured I could leave the boat in the water, head back and forth often, and work on the boat AND get my sea legs back. Or I could live aboard in Naptown and maybe get a part-time job locally through the winter. Either way, I’d spend the winter getting my and Further’s acts back together before next spring when we’ll head back to New England.

There’s another possibility that is tugging at me a bit, however: I’m thinking I could take the boat down the Intracoastal Waterway to someplace warmer — Florida, perhaps — for the winter. It’s been nippy enough waking up aboard Further the last few mornings that America’s third-world country down south seems quite appealing.

But I’m in an area of Annapolis that is really appealing. Eastport, known as the Maritime Republic of Eastport, is the funky section of town, home to great pubs and restaurants, a lot of boating businesses and a funky crew of locals that have a vivid joie de vivre. And I’m currently living in the funkiest part of Eastport — Stella’s Stern and Keel Marina — which I’m really enjoying. My neighbors have returned following Thanksgiving and they’re all really nice, really interesting people. It’s been great settling into the neighborhood.

That funkiness does come with a price, however. Up here in June’s Cove, the water is thin. When we get a big storm that blows all the water out of Chesapeake Bay (as happened the first weekend I was at Stella’s), Further’s keel sits on the muddy bottom at low tide. It’s not damaging the boat but it does make me wary and it means Further can’t get in or out until the water rises again.

And then there’s the aforementioned distance to the ocean and the chilly nights. Maryland DOES get winter so I’m expecting true cold and even some snow later in the season. It’s still only November.

So I’m really in a fix right now as I wrestle with the possibilities. I will definitely head north next spring, but what to do for the next four to six months? How much sailing/motoring would I really do here over the winter? What if conditions are good but the water level has me stuck at the dock? But am I ready enough to even consider heading down the ICW for Florida at this point? And if I’m not in New England for the winter, what will I do about hockey? (Yes, as trivial as it may sound to you, hockey is a big part of my life so it IS a factor.)

Among the things that tipped me over the edge into buying Further was the image I use as my laptop’s wallpaper. It reads: “Life will only change when you become more committed to your dreams than you are to your comfort zone.” Hockey and Plum Island are right in the wheelhouse of my comfort zone, so maybe stepping away from both of them is a good idea, an impetus for growth. To be honest, the hockey this fall has been great but I’ve been stagnating at the island, with nothing really going on other than helping my brother with projects around the house. Even if I’m not doing much down here in Naptown or any farther south, at least I’m making progress with Further and pushing that dream along. So it seems as though prioritizing a life that enables me to work on the boat is the way to go. From there, as detailed above, the questions arise.