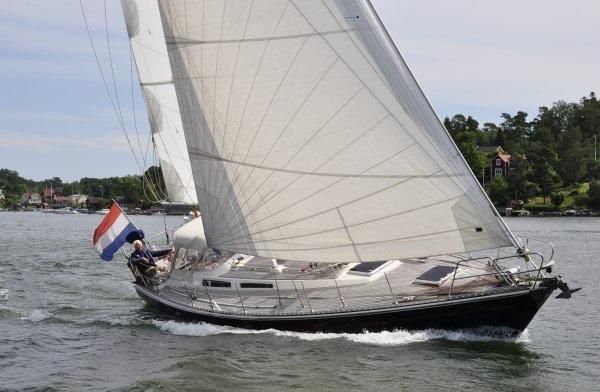 The eyeglasses weren’t the only long-impending event to recently — finally — occur. To paraphrase Andy Samberg (caution: VERY explicit language): I own a mother@#$$#@ boat!

That’s right: After 35-plus years of dreaming, scheming, reading and gaining some small bit of experience, I finally grew enough of a pair to drop some serious coin and buy a sailboat. And my first reaction was, naturally: HO. LEE. $#*T!

The boat dream goes way back to my youth. I learned to sail at summer camp and then my family had a Hobie Cat I sailed off the beach at Plum Island during the summer. Too many surfing magazine stories about tropical idylls and too many Jimmy Buffett songs cemented the image in my head of a wind-borne escape to warm, turquoise waters with perfect waves and no crowds.

And I came close a couple of times to approaching the dream. When I came home after playing hockey in Europe, I had a little bit of money saved up and I found a 1950-something Hinckley yawl in South Carolina for sale in magazine (the World Wide Web had yet to be invented). I asked my mother for the ten grand to make up the difference and, knowing full well my dream, she immediately said no. Can’t say as I blame her but boy, what might have been…

In the fall of 2011, after an amazing summer of crewing for my friends Boogie and Marlies in the WAY North Atlantic (there are tons of posts on that time contained herein; see the archives in the right-hand column), I began surfing boat listings online. Boat porn, as it’s called, became a serious addiction, but it almost paid off right away when I found not just one of the boats I’d dreamed of since I was 13, I found THE boat: the exact one I’d seen in photos and stories was available. I made an offer that was accepted, but upon doing a survey (an inspection), I learned that there were issues with the hydraulic centerboard. I pulled my offer and the yacht broker turned into a serious dick, yelling about how it was no big deal. Several months later, I was once again aboard a boat with Boogie and Marlies, this time in St. Maarten for the Heineken Regatta. As it turned out, we were in a slip in a marina next to the guy who had been the project manager on the aforementioned dream boat when that Rhode Island company had been going full-bore in the 1970s and ‘80s. I told him what the survey had revealed and he exploded (in classic Yankee style) that what the broker had suggested as a fix was “goddamned stupid” and that the broker “didn’t know what in the hell he was fucking saying.” So I felt like I’d dodged a bullet, but I was still kinda bummed.

And then this summer, there it was. A Dutch-built boat (hey…Boogie and Marlies are Dutch! It’s a sign!) was listed in Annapolis. It was a bit out of my price range but I kept my eye on it now and again because that brand of boat had a reputation as strong, solid, fast boats, and that’s what I wanted. But I couldn’t quite rationalize the expense the owner was asking.

Three weeks before the Annapolis Boat Show, which I would once again attend and help a friend of mine whose company has a booth at the show, the price dropped by almost 25 percent. I called the selling broker and saw the boat the day I arrived in Annapolis. It was nice and it was in good shape. And it was calling to me.

I called an Annapolis broker I’d worked with in 2012 and asked him to represent me — I didn’t want to go into such a deal without an advocate on my side of the table. A few offers and counters, a survey and a trial, and I closed on the boat two days ago on Friday, Nov. 17, 2017. And again I say: HO. LEE. $#*T!

The boat is a Trintella 42. It is 42’3” long and is a sloop rig. It has two cabins — so that you married friends can come visit me and you’ll have your own, private cabin — as well as two heads (toilets, for those unfamiliar with the nomenclature), a nice galley (kitchen) and saloon (living room).

She is currently called Glory but I’m going to change her name to Further. Why? Well, further is where I want to go. And Further was the name of the bus Ken Kesey and the Merry Pranksters drove around for the acid tests in the ‘60s. The bus was their means for searching for higher truths and I’m hoping my Further will be the same for me — without the need for pharmaceutical assistance.

I moved Further yesterday to her new home at a funky marina way up at the head of a creek in Annapolis (my broker said of the owner of the place, “he’s a funkmeister.”) The place has a dozen or so slips, most occupied by folks who live aboard, and there’s a small bathroom/shower in a shed on shore. Wedged in at the head of the creek as we are, there are a lot of ducks and herons and trees and quiet. What there isn’t is glitz or glamour. I like it. I also like the cheap rates and walking access to Annapolis/Eastport lifestyle.

The current game plan is either: a) leave the boat here in Annapolis for the winter and either live aboard or make frequent trips down from Plum Island to work on the boat and get my boating legs back (I needed my broker’s help to move the boat yesterday; who am I kidding…he did the move I just helped); or b) get the boat ready to go ASAP and head down the Intracoastal Waterway to Florida and spend the winter getting my legs back there. This Thanksgiving week will be the time I make up my mind on that front.

Expect to see a lot of the posts hereabouts to involve this major step in my life. And it is just that: a major step. It’s not just a new toy. I’ve had two great dreams in my life: one, to live in Alaska; and two, to sail away. I accomplished the first. Now it’s time to (finally) go for the second. In fact, this second dream took root in my soul a few years before the first. And who knows? After my time in 2011 aboard a sailboat in places like northern Norway, Iceland and Greenland, it may just be that Further is my ticket to combine my two dreams. You may just see me sailing away to Alaska one day…

2 thoughts on “Take To The Ship”