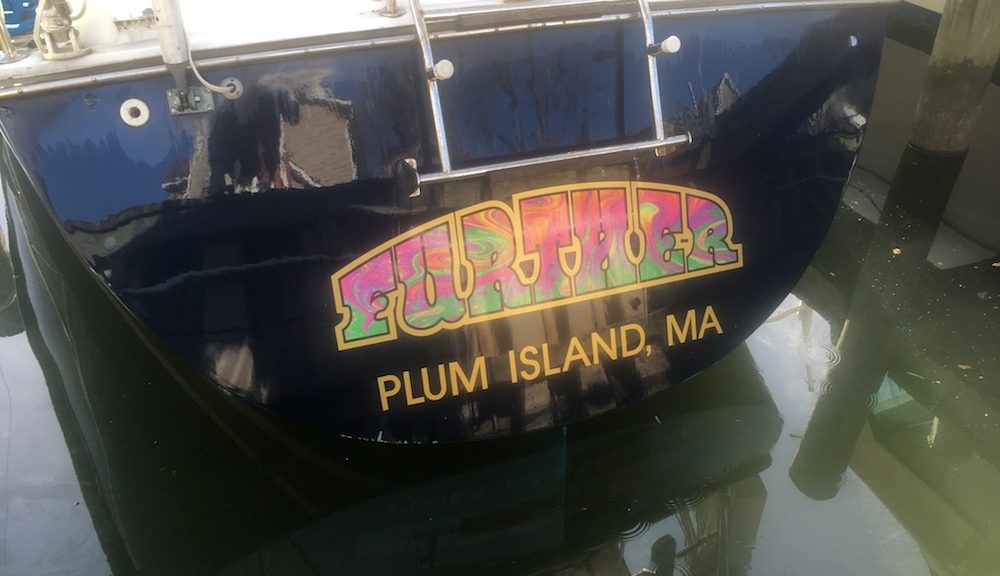 The rites have been performed, the gods appeased. The ceremony is complete. The boat is now mine. And her name is Further.

I actually declared her name when I announced my purchase back in November. But the cold weather prevented the local graphics folks here in Annapolis from doing the work until just this past Tuesday. And once they applied the actual vinyl, protocol demanded keeping the name under wraps until a proper renaming ceremony could be performed. That meant as soon as possible because I couldn’t take the boat out (and it has been warm enough lately that the cove and creek leading to Chesapeake Bay have finally thawed) until the old name was exorcised and the new one christened. That the weather forecast for today, four days later, was nice — sunny and high 50s — sealed the deal.

Then I posted a photo of the covered-over transom on Facebook in an announcement of the impending renaming and friends started speculating about what the new name might (or should) be. Some suggested silly names that had been internet memes (Boaty McBoatface…really?!) while many suggested something referencing my late dog, Spooner. One friend remembered my earlier declaration and asked about the name; the showman in me quickly deleted his comment to keep the speculation going.

Well, for starters, I’ve had the name in mind ever since I started daydreaming as a kid about my future boat. When I thought about what I might call her, I kept coming back to what I wanted my boat to do: transport me — physically, spiritually, intellectually — to new adventures, new worlds, new lives. I realized Ken Kesey and the Merry Pranksters had the same goal in mind when they named their psychedelically painted school bus “Further” and made that the bus’ destination sign.

Bob Weir of the Grateful Dead (house band for the Merry Pranksters’ Acid Test parties) sings:
“The bus come by and I got on, that’s when it all began
There was Cowboy Neal at the wheel of a bus to Never Ever Land.”
The song refers to Neal Cassady, legendary inspiration for Jack Kerouac and the Beats, now leading Bobby, the Dead and the Pranksters as they sought the next level of human consciousness. And they sought it on board Further. Well now I’ve found my bus and with her I hope to seek out MY next level, through the grace of Mother Ocean rather than any man-made drugs. (I can assure you: music will be a big part of the journey on Further, and a lot of that music will be Grateful Dead.)

As the Pranksters hoped LSD and their bus would do for them in the ‘60s, so I hope my Further will take me to faraway realms and bring me back safe and sound in the 21st century. And I hope you, my friends, will join me in the coming years in exploring this watery planet. I WILL need crew; I WILL need help. I can’t do it alone. Stay tuned for more details as they shake out, but stage one on the journey is to finish sorting out Further and get my sailing legs back while here on the Chesapeake. In May, we’ll return home to New England: I’ve reserved a mooring on the Merrimack River in Newburyport. I’ll go back to living at home on Plum Island and do a lot of daysails and short cruises in Massachusetts, New Hampshire and Maine (maybe even Nova Scotia). And then, next fall, well, you’ll just have to tune in and see. Or better yet, come along on the ride to Never Ever Land.

Note: Special thanks to Chris and the folks at Accent Graphics in Annapolis. I showed Chris a photo of the bus, Further, with its destination plate and he created the font for the graphic used on the boat, Further.