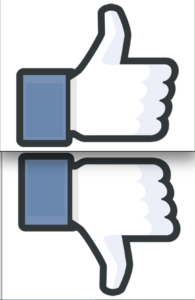 I’ve been waffling lately over the role social media is going to play in my life going forward. And several factors, both personal and global, contribute to that uncertainty. And by “social media” I’m largely referring to Facebook.

On the global level: Several friends have deleted their Facebook accounts in the wake of the Cambridge Analytica scandal currently simmering in our national discourse. And I have to say that the egregiousness of that data breach is breathtaking. No, it’s not surprising, especially to one who has worked in online media and made use of the data even a benign, casual mining effort can glean. But the malicious intent behind Cambridge Analytica’s efforts—and more importantly, Facebook’s casual dismissal of the impact of those efforts—makes all of the comparisons to Orwell and 1984 resonate. And for what? A measly $100,000—that’s what Facebook sold us all down the river for. A company that is valued at many billions-with-a-B sold us out for what is to them pocket change. That pisses me off.

In the wake of the revelations I, like many others, downloaded my Facebook data. And what it showed me was this: not using Facebook on my phone and not doing any of those inane “what kind of a fill in the blank are you?” quizzes, along with clearing my cache every time I close my browser, helped minimize any damaging information that might have been shared. But then again, you wouldn’t have to be a whiz-bang data analyst to look at my page to deduce that I a) am liberal, b) like sports and c) listen to the Grateful Dead. Wow. Earth-shattering…not. But it’s the thought that counts.

(Side note: Years ago, the ex-boyfriend of my niece responded to my mention of the fact that I clear my cache by rolling his eyes and saying, “Oh, you’re one of them.” “Yes,” I told him. “You don’t want to know what I can learn about you if you use my station’s site…and I’m not even trying.” Turns out I was right.)

On the personal level, my social-media hiatus in February was both illuminating and disheartening. I found that I was like an addict going through cold turkey—reinforcing all the insiders’ observations that they had programmed Facebook to give you that dopamine hit and keep you hooked. But I also found I enjoyed putting time that might have been spent surfing Facebook into doing other, real-world things. In the words of Jackson Browne, “I want to live in the world, not behind some wall.” I want to see the world with my own eyes, feel it with my own hands, hear it with my own ears. I don’t want to live vicariously through Facebook-savvy others.

Where that rubs up and creates a problem is that I enjoy staying in touch with a lot of people, friends who, if we’re being honest, I wouldn’t be in contact with were it not for Facebook. No one (me included) writes letters or cards anymore. I detest talking on the phone. And those friends and I really aren’t going to just email to stay in touch. Life being how it is, Facebook DOES enable us to keep our friendship active and vibrant, even when we’re thousands of miles and a few decades apart. That IS a cool feature.

No, I don’t believe a handful of people deleting their accounts is going to have an impact on Facebook’s corporate behavior. But I also don’t have to contribute with every click to those inside the company’s getting richer and richer by engineering to the downfall of western democracy. And yes, I do believe Facebook’s impacts could (they haven’t yet, not completely) prove to be that insidious.

One friend chastised me prior to my hiatus, saying I should just not sign on. And maybe that’s the answer. Right now I’m weighing the pros and cons of deleting my Facebook account, going on hiatus again or just not signing in. I’d be curious to hear your thoughts, friends. Thanks.

PS: Yes, I have this blog set to require approval before comments appear. I will approve every comment that engages on the topic. There’s just too much spam for me to open things up completely.

PPS: As for other social-media platforms: I don’t Twitter much because its news focus (and that’s on me based upon which accounts I follow) is just too exasperating. I’m getting to like Instagram—and yes, I know it’s owned by Facebook. But being able to quickly (and visually) see what friends are up to is, I must admit, pretty cool. And thus far, it hasn’t been overrun by bots and trolls and depressing news.