The Chugach Mountains cast an early morning shadow over Anchorage. Riding point for the Chugach is Flattop Mountain, LITERALLY Anchorage’s backyard and the most-climbed mountain in Alaska. From the Glen Alps Trailhead, it’s anywhere from 30 minutes (if you’re running) to a couple of hours (if you’re waddling). I tend to be more in the middle: my average time runs about 40 minutes. 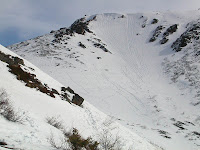 Flattop Mountain from between the first and second saddles

Last week I took two jaunts up the snowy slopes. On Thursday, I cruised up on frozen snow under a wonderfully warm sun. Three days later, my Sunday hike took part in a slushy snowpack that was noticeably thinner. I wore Yak Tracks though they provided no more grip than the vibram soles on my shoes (boots on Thursday: excessive; ankle-high hiking sneakers on Sunday: a bit ambitious as the snow softened). 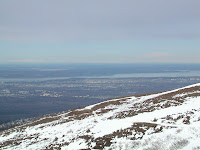 Can you see Denali through the haze? Look how big it is…and it’s 125-ish miles away!

It’s interesting how the snow changed the trail. In some ways, it made for a quicker hike: switchbacks were eliminated and a straight route taken. But that straighter route was often steeper, require a bit more sweat equity. For me, the difference was minor: 45 minutes to the top, both days. 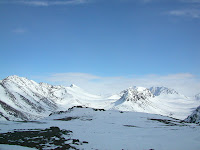 The route down on Sunday, however, was much quicker. Rather than follow the boot-kicked stairs down the ridge from the summit, I opted to slide on my ample butt and made the descent to the second saddle in a couple of minutes. As I walked out from the Flattop bowl, I sank to my crotch at times: clear sign that the snowpack was too soft and should be avoided. And true to form: a couple of days later, a hiker/sledder was killed by an avalanche on Bird Ridge. 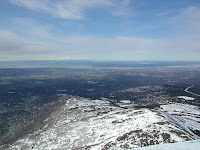 Looking out over Alaska’s population center
So my forays to Flattop are likely over for now. I might squeeze one more hike in next week, but if I go, it’ll be on the ridges and in avalanche-safe areas, for sure. But as with hiking the peak in the summer: as long as you’re smart, it’s a hike anyone (in reasonable condition; the final push to the summit can be a bear) can and should do. The views from the top — from Denali and the Alaska Range up north to Mt. Illiamna down to the southwest — are spectacular, and as you sit on the edge of the flat summit that gives the mountain its name, you’ll get a glimpse of Alaska’s population center just over the tips of your toes. It’s a grand view, and one I’ll miss…until I return again.