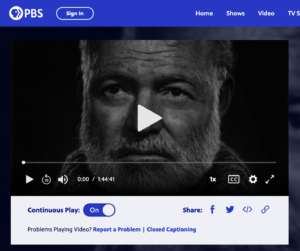 The Ken Burns documentary on Ernest Hemingway ended a few minutes ago. I watched all three episodes when they aired and wouldn’t have missed it for the world. Check out my “What I’m Reading” page and you’ll see a lot of books about Hemingway. That’s in addition, of course, to his own works, of which I’ve read pretty much them all and that predate this here website.

As I wrote in one of those reviews, I have “an off-again, (more often) on-again” attitude about Hemingway’s writing. More often than not, I find his writing to be everything it’s cracked up to be: clean, direct, truthful. Pure, even. Other times, I get bogged down in just what an asshole he was, and maybe that’s not fair to him as a writer. But I believe that asshole-ishness manifested itself in his lesser works in the blatant self-aggrandizement and subsequent self-indulgent prose.

But what can’t be denied is Hemingway’s influence and importance to all prose writing that came after him. As one of the first commentators in the Burns doc put it, Hemingway created the furniture of literature and now we all have to sit in it. As such, he’s too important not to get the Burns treatment, and I’m glad the documentary was made and I’m glad I got to see it.

Not only did I watch the documentary because of Hemingway’s importance as a writer, but also because I have a personal sort-of connection to the man by way of my father.

My father was a huge Hemingway fan. So much so that I can still recall more than one episode where Dad, upon arriving home from work late in the evening, drunk, would sit me down on the couch in the living room and read from some of Hemingway’s work. He’d remark on how good the writing was, how sharp the author’s observation. Mostly I just endured it but I can also recall one instance when I was in junior high when I begged off, saying I had to go do some homework. A lie, but an effective one, as I recall.

Later in my father’s life, I regularly spoke with him about Hemingway, and about the time they had met and drank together in Cuba. In fact, after tonight’s conclusion I found some short recordings I made in the spring of 2013 when my father was in the hospital yet again. I got him talking about Hemingway while surreptitiously recording him with my iPhone. One of the great regrets of my life is that my mother died not long after we had begun recording some of her stories, recordings I was going to transcribe and turn into a book. As strained as the relationship was between my father and me, I didn’t want to lose some of the stories I knew he had. Sadly, I did, but I do have those three-minutes-or-so of voice memos from 2013.

My father was in Havana in 1953 working for the Herald Tribune and was introduced to Hemingway by Col. Buck Lanham. My father had met Lanham previously and the two men had connected over their shared experiences having fought in the Battle of the Bulge (they remained friends long after Hemingway’s death; I saved some of the correspondence between my father and Lanham from the 1970s). So when my father went to Havana, Lanham, who as the documentary detailed was a good friend of Hemingway’s, arranged a meeting at the Floridita. Not on tape but vivid in my memory is my father saying that Hemingway quizzed him on some specifics of an area in which my father had fought. When Dad described the scene in detail that couldn’t have been found in a book or a story, Hemingway said something to the effect of, “You were there, have a seat.”

The documentary also detailed some things about Hemingway’s time in Europe during World War II that I didn’t know but should have: that he had spent significant time actually fighting in the Battle of the Huertgen Forest, a particularly brutal battle about which I have written before because that’s where my 20-year-old father fought and, I believe, where he never came home from. Hemingway returned to Cuba not long after the battle scarred, according to the documentary, so apparently that’s another connection my father shared with Hemingway that I guess I was a little unclear on before.

I always thought it ironic that I lived (briefly) in Ketchum, Idaho, the town where my father’s favorite writer life came to an end. And even more ironic, the father of a dear friend of mine in Ketchum had Hemingway’s typewriter (since donated). I thought those were details my father would appreciate, and that Christmas I got my Dad a book about Hemingway’s time in Idaho. But he didn’t really seem to care much. I don’t believe he ever looked at the book I got him.

Maybe like Hemingway himself, the Idaho version was a shadow of the Hemingway my father admired and cared about. I just know that Hemingway was something my father and I shared at various times in our lives. The man and the writing were one of the few areas where we could find common ground in an otherwise tumultuous relationship. I wish my father could have seen this documentary. I’d have been very interested to hear his thoughts. And I appreciate Ken Burns and Lynn Novick for bringing those times back to me for the past few evenings.