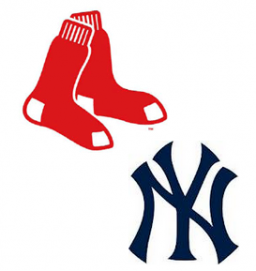 As I turned the corner from State Street onto Pleasant Street, bound for the local coffee shop for my morning chai and blueberry muffin, the truck was parked on the right-hand side outside the pizza parlor. The driver-side door was open, making it impossible to proceed. I waited — the streets of Newburyport are clogged with delivery trucks each and every morning — and after the guy climbed out of the cab and shut the door, he turned to walk toward the back of the truck. And that’s when I saw it.

He was wearing a Yankees hat.

He reached the tailgate of his truck and I eased forward. He waved thanks and I said out the window, “I dunno, man, with that Yankees hat you got on, I kinda feel like I missed a chance.” He threw back his head and laughed and yelled, “C’mon, now! We’re in front, aren’t we?” as he reached in the passenger-side window to shake heads. I smiled and said no, the Sox were up by three games to which he replied that he didn’t get wrapped up in ANY of it until October. And I couldn’t disagree.

We started to chat about it more but a car behind me honked so he went his way and I went mine, him to work and me to the coffee shop. And though I tried to read my book, I couldn’t focus. My mind kept going back to that brief incident a few minutes earlier. And I couldn’t help but smile. Me! The guy whose blood boils when people don’t use their turn signals or they talk on the phone while driving or commit any number of unforgivable sins. And this guy had committed the gravest sin of all: he was a Yankees fan. Outrage!

I think what I was the feeling was the true joy of an interaction with another human being. Brief and on-the-surface, true, but purely joyful and purely happy and purely…pure.

I’ve always believed the Universe provides signs everywhere in our lives. “Our teacher is everything,” the Buddhists would say. It seems the Universe threw out a lesson to this curmudgeonly misanthrope this morning, and it has colored my whole day — a day that began with continued mental turmoil (more on that later) from recent days — in the best of all ways. I only hope I can do the lesson justice, make the Universe smile with pride and keep the feeling going. Because I sure do like it.

All thanks to a Yankees fan. Who’da thunk it?

One thought on “It’s the Little Things”