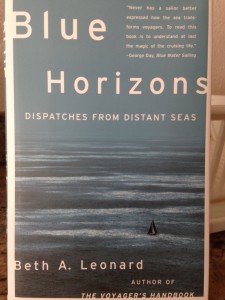 So. How’s it going, three weeks into my self-imposed exile from Corporate America? I get asked that often and my answer is the same: I’m still sorting things out. I’ve been surfing a bunch (managed to hit the bottom head-first during a wipe out; took a divot out of my skull — including, tragically, a swath of my already-thinning hair — and gave myself a monster case of whiplash); playing a bunch of pick-up hockey; no, not writing enough; but hey, I’ve been reading a bunch.

And one of the books I read recently was Blue Horizons, a compilation of Beth Leonard’s end-of-the-book columns from Blue Water Sailing magazine. The columns are, as the subtitle states, “dispatches from distant seas,” and unlike many cruising columns, Beth’s are not about turquoise waters and palm-tree-lined beaches. Rather, she and her partner, Evans Starzinger, explored a lot of high latitudes: Newfoundland, Scotland and Iceland, Patagonia, Tasmania and southern New Zealand (including one marathon passage of two months from Patagonia directly to Australia…yikes).

It should surprise no one who knows me that theirs was an itinerary that resonated on a primal level with me. Despite being firmly middle American throughout my life, I’ve managed to find myself living in some pretty interesting and challenging places. High latitudes? Yup: Alaska, and even northwest Montana and northern New England are places of long winters. In addition to Montana, I’ve also lived at other high-elevation homes of seasons and long, harsh winters: Utah and Idaho. And as I’ve recounted throughout this blog, I spent the summer of 2011 sailing at decidedly non-Caribbean of high latitudes of northern England, the Shetland Islands, northern Norway, the north coast of Iceland and Greenland.

So while I love surfing in trunks-only water and the idea of sipping rum drinks in a Caribbean lagoon really calls to me, Beth and Evan’s route marked them as the kind of sailors I’d like to model myself after. I read Blue Horizons, yes, to get still more inspiration to chase them and my oft-stated dream of sailing away. But what I hadn’t expected was a dose of reality that was even more inspiring than all the grandiose tales Beth told.

Because as the possibility that I COULD chase that dream arose recently, I’ve been concerned that maybe I was a fraud, a poser. That I’m not really cut out to sail away and it’s all been just a fairy-tale vision I’ve had. I’ve wondered if I hadn’t gone yet because deep down I don’t really want to. And why not? Because I’m scared. Sure, I’ve gone sailing for long stretches…but always on other people’s boats and at those friends’ instigation. There are some aspects about sailing that still unnerve me.

It may surprise you to know that pretty much every time I head out to sea after a long absence I get seasick for a good 24 hours or so. Not much of a sailor there, eh? And while I might seem to be the biggest hermit you know, in reality I’d really prefer to sail away with someone else who’s also interested in seeing what we can find. If I’m being honest, I’m nervous about actually throwing off the lines and sailing for the horizon.

So Beth’s advice to an equally nervous would-be cruiser really caught my attention. The neophyte asks Beth, “But how can I know if I should go or not?” Her reply:

You can’t. And if you have to know, then you shouldn’t go. But I can tell you this: if you feel the need to make a change in your life, if you’re dissatisfied with who you are and the path you’re on, any amount of time spent cruising will head you in a new direction.

Wow. Just 21 pages in and I already felt like sailing authority Beth Leonard was talking directly to me. I’ve written about my dissatisfaction with who I’ve been and the path I was on of late. But three weeks ago I took the first step in a new, still-to-be-determined direction, with the notion in the back of my head that it might be time to take the plunge and pursue that dream of mine that dates back to my pre-teen years. To read Beth Leonard tell tales of her being seasick, to hear her say that parts of the journey flat-out suck, well, it took some of the pressure off — and I realize that’s self-imposed pressure that everything always has to be rosy and cheery. More from Beth:

I think of myself eight years ago, certain I was heading in the wrong direction despite following the script laid out for me…With each step I took, I was moving farther from the person I had hoped to become. By setting sail, I stepped off that scripted path. I’ve been writing my own script ever since.
What’s cruising really like? It’s marvelous and terrible and scary and exhilarating.

Guess it’s time to write my own script. Thanks for the kick in the ass, Beth!

One thought on “Writing My Own Script”