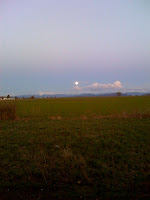 I’m sitting in the Fairhaven district of Bellingham, Washington, waiting to board the Alaska Marine Highway System’s ferry, the M/V Malaspina. I’ll be taking the ferry through the Inside Passage to Haines, where I’ll rejoin the terrestrial highway system and drive through a couple of hundred miles of the Yukon, circumnavigating Kluane and Wrangell-St. Elias national parks (Canadian and American, respectively) and mountain ranges, to return to Anchorage a few days hence. Simply put: the thought of retracing my steps through the entirety of British Columbia and the Yukon after having come south just four months ago was too terrible to contemplate. I’ll leave the majority of the driving — three days’ worth, this time of year — to someone else.

It’s a return, to Alaska of course, but also a return to a route taken long ago. Almost 19 years ago, to be exact. In May 1992, I was in this same town in my VW camper van with my dog, Spooner, and we were off on what was then a great adventure: a couple of months of cruising through the Great Land, living in our bus. It was a tremendous, truly life-altering trip in 1992, and coming down the hill toward the ferry terminal today got me wistful for those long-gone and vastly different days (and not just because I still wish Spooner were around to join me on these trips). Despite what this particular trip to Alaska will entail — how long I’ll be there, what my employment situation will be, how much work I’ll get done on my house, etc. — there’s always a sense of comfort when returning to Alaska. Not a return home, exactly — I’ll always be a New Englander — but a return to my second home but an equal first love. To say I’m looking forward to the journey would be an understatement.

And it’s been an interesting trip so far. I’ve watched spring emerge in places and yet seen winter still firmly in command. Orchards are blooming in California’s Central Valley, and flocks of ducks and geese are massing in Oregon’s Willamette Valley, prepping for their journey north. And yet, inland, in the Sierra Nevada mountains and beyond, in the Great Basin, in Utah’s high mountains, winter is still very much in control. But the fact remains: it’s only February but spring is indeed on the way. The vernal equinox is just 31 days away.

Last night’s full moon, which I enjoyed from around Eugene, Oregon, northward, seemed a portent of the times to come: bright, vibrant, glowing. I’m looking forward to the coming days.

(iPhone photo of the full moon rising over the mountains east of the Willamette Valley from the side of I-5 near Eugene, Oregon.)