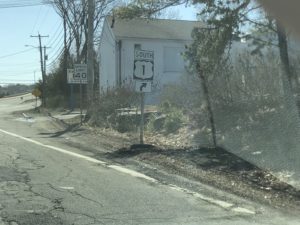 The other day I was driving home from nearby Seabrook, New Hampshire. I’d gone there to take advantage of the Granite State’s much lower prices on beer and wine — necessities during these crazy times of global pandemic — and on the drive home along U.S. Route 1, I found myself longing for my parents’ thoughts.

Returning from Seabrook, as I slalomed around Route 1’s car-eating potholes and beneath overpasses with rusty rebar visible through holes in the concrete, I remembered being a kid and riding around with my father all over New England. He’d grown up before Eisenhower’s interstate-highway initiative and told us about how Route 1 was a paved thread that ran all the way from Florida to Maine, that such a connection was an important, amazing creation. Nowadays, Route 1 is little more than Main Street in many towns, full of momentum-sapping speed limits and stoplights, while the interstates entirely bypass society just a couple of miles away.

Weaving along Route 1, my father’s history lessons returned once again to the front of my mind. As I’ve mentioned in this space before, my folks were born in the 1920s and grew up during the Great Depression. They and their families survived those horrible times, and I found myself wondering how they would react to the hoarding of toilet paper and having to self-quarantine and all the other horror stories we’ve been hearing about of late. Though both my mother and father had come about as far as one could from their early days of privation, to the point of living very upper-middle-class lives, I suspect they would still have some deep-seeded memories and methods for surviving this 21st century version. And I suspect they’d have lessons to offer that would be helpful.

Every day I see books in the shelves about Camp Shanks, the Army embarkation camp just outside of New York City where my father shipped out to his combat duty in World War II. After the war’s end, the area became his and a lot of other families’ home, and yet, what’s left? A small museum in the old elementary school, and a couple of books on a bookshelf. Such an important, pivotal place, full of collective knowledge particularly valuable in these days, and it’s little more a suburb of strip malls surrounding a couple of off-ramps on the Palisades Interstate Parkway. What insights those people who settled the post-war landscape of what is now Orangetown, New York, could offer us in these times. Sadly, all those insights are, as Roy Batty lamented in Blade Runner, “lost, like tears in rain.”

We lost another generational thread recently with the passing of Marie, a neighbor and the mother of some dear friends. Marie and her husband, Joe, who passed some years ago, were close friends with my parents, and Marie was the last of the quartet. I wasn’t able to see her in her final days for fear of bringing along this damned virus, if I had/have it, but had I been able to, I would have cherished the opportunity to ask Marie about her thoughts on stockpiling and rationing and making do.

This loss of generational experience and knowledge is visible in the various generations’ reactions to this pandemic. Oldtimers hunker down for safety’s sake while careless millennials whine about having their spring breaks cut short. And Gen X just kinda cruises between the two. Personally, as the offspring of parents who had kids late, I find myself caught in between all of the warring generations.

My birth year (1966) places me among Gen X, the age group whose nonchalance honed by growing up tending to and entertaining ourselves has supposedly made us perfectly suited to the current challenge of social distancing.

And yet, as the son of a man and a woman who grew up in the Depression, I am experientially, if not chronologically, a Baby Boomer, having heard first-hand tales that would be so useful today. Because I didn’t live those tales, that knowledge remains sadly out of reach. And that’s what I miss right now. That’s what I believe our entire society misses right now.

Dad never lost his fascination with an innovation like Route 1, I guess because he’d seen so much over the course of the 20th century. And now, separated from the rest of society, even this curmudgeonly hermit is left to wonder just what we gained, and lost, in Eisenhower’s bargain. Sure, I love being able to get from here to, say, Annapolis in eight hours on I-95, but sometimes I wonder about driving Route 1 the whole way and spending the several days it would take to really see the America that exists behind the sound walls lining the freeways.

Roy Batty spoke for us all.