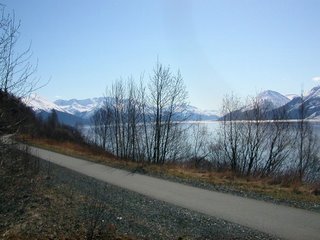 Yes, there were 12 miles of being wedged in between a bashed guard rail and an endless stream of oversized-load boat trailers headed for their annual return to the saltwater (twice actually, it’s an out-and-back). But what else was there? How about 26 miles (13 each way) of:
* Snow-covered glacial peaks shimmering — literally shimmering — in the warm sunshine.
* The biggest tides in North America coursing through the fjord cutting in from the Pacific Ocean.
* Bald eagles scouting for their next meal, so calm that when I shouted “Hey!” one fella actually startled, fluffed up his feathers and turned to see who had broken his concentration.
* Countless ducks, in pairs, newly returned from warmer climes and dancing on the puddles filling below avalanche paths.
* Virtually no wind; this in a wind-tunnel fjord that prompts the local meteorologists to qualify the local weather forecast for that area alone.
* A suntanned face. In Alaska. In mid-May. And I’m not up on Denali.
As the ad says: Priceless.