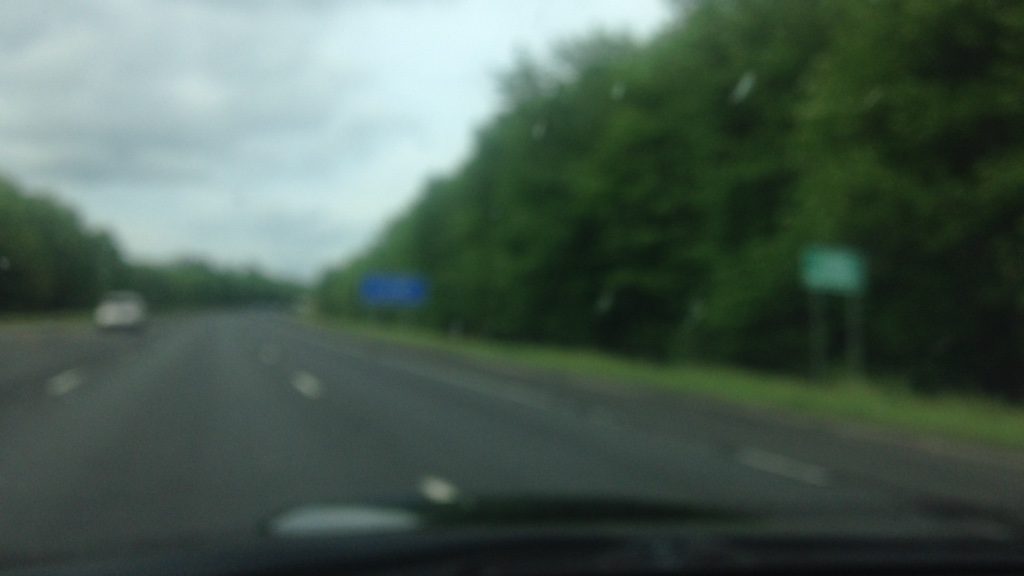 He saw the flash of the car in the side mirror an instant before it passed him on the left. It was late afternoon in January and his headlights were already on. Diffuse gray clouds stretched from horizon to horizon, foretelling the snowstorm that was predicted to arrive in New England that night. He was settled into the center lane of the interstate heading southwest, hoping to get at least as far as the metropolitan New York City area before calling it a night. If he made it that far, he reasoned, he’d be south of the worst of the storm and able to continue his southerly run the following morning.

The silver flash — one of those foreign sedans that 20-somethings use for street racing — went past his eight-year-old Subaru wagon in an instant, doing a good 15 to 20 miles an hour more than he was driving.  And his cruise control was set to a notch below the de facto American freeway speed limit of 75. They were both passing the junction between belt route they were on and the north-south freeway from the nearby big city.

A few seconds before the silver flash went by him, a minivan had merged from the on ramp into the flow of traffic going in the same direction he was going. It then moved to the left again, taking up a spot in the center lane about five or six car lengths ahead of him. It paused for a moment in the center lane before signaling left again and moving into the passing lane though there was no vehicle in front of it in the middle lane. He thought to himself, “This is not good,” and pulled his foot off the gas pedal while glancing in the rear-view mirror.

Time came to a halt but the sedan never flinched as it closed on the minivan. Then its brake lights came on, a sudden bright-red explosion in the darkening sky, and the silver car swerved to the right to avoid this obstruction in the passing lane. The red tail lights then dashed across the scene toward the right of the highway as the sedan overcorrected for its sudden turn. The front bumper, now spinning into the left lane, caught the right rear of the minivan, sending it into a  spin in the opposite direction and careening toward the grassy median to the left of the passing lane.

White smoke and the smell of burnt rubber was already rising from the black streaks that had appeared on the pavement, and he slid his wagon to the right, into the merging on-ramp lane in front of an 18-wheeler joining the belt route from the north-south highway. A second, maybe two, seemed to take an hour as he passed without breathing half a car length behind the tail of sedan as it continued spinning, now back toward the middle lane and now beyond into the left lane.

He started to slow but saw in his mirror that the 18-wheeler was part of a wall of traffic bearing down on the scene. That wall had already begun a rapid deceleration and the truck was moving toward the highway’s shoulder when he realized that stopping, getting out and heading back toward the scene into the flow of traffic under darkening skies was not a healthy idea, so he continued on toward the southwest, as time and his breathing resumed their normal paces.

And he set the cruise control for a slower speed.