I’m listening to Smetana’s ode to his Czech homeland, Má Vlast, as I coast along the Vltava River on the train, half an hour out of Prague. It’s a gorgeous piece of music (thanks, H) and is a moving testament to this river and this beautiful country.

And it is a beautiful country. From the time I crossed the border last week, northbound from Munich, the Czech countryside was enticing in all its green. Yes, green. Rolling, forested hills interspersed with farmed valleys and pastures, all appeared to glisten, glowing as though it had just rained a few minutes ago and now the sun had come out and was reflected in a billion dew drops. Creeks and rivers in varying shades of silver through brown (complete with fly fishermen in a couple of spots) provided an accent on the emerald shades, and kestrels hovered over fields of past-their-prime sunflowers, pointing out the imminent autumn equinox just a few days away. Orchards of apple trees heavy with fruit reminded one of the good harvest that also loomed.

True, along many of the rivers defunct factories and barges sat idle and rusting, forlorn and calling to mind darker days from the past. But as quickly as the industry had appeared it was swallowed up again by the forest and the hills and the river, along with backyard gardens the exploded in the red of roses and other flowers. And around many bends, small solar-power farms shared ground with sheep pastures, pointing toward a much different future. It was an interesting juxtaposition: the white, fleecy animals carelessly munching away amid the black sheets of silicon set on racks a few feet above the ground.

And then the train pulled into Prague. I’m on record as saying Prague is the prettiest city I’ve ever seen and I’m not backing off that assertion. Gorgeous chapels and cathedrals, some extravagantly ornate while others are subdued in their simplicity, occupy pockets throughout the city. Statues and towers appear out of nowhere and even common apartment buildings sport intricate decoration from various periods throughout this city’s long history. If you’re a fan of architecture, you really need to see Prague. This city has it all and it’s all of amazing quality. 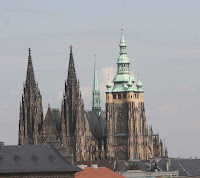 The cathedral at Prague Castle

Gargoyle on the cathedral at the Prague Castle

On top of all that — literally — is the famous Prague Castle. Perched on a hill overlooking the river, the castle is more like a small city all contained within ramparts than simply a castle. There are multiple churches, including a magnificent cathedral, massive structures housing Czech official business, and numerous other buildings housing everyday businesses and shops. And every last bit of construction within the castle walls is stunning in its quality, its painstaking detail, its scale and its sheer beauty. The Prague Castle is, figuratively and literally, the crown jewel of the city.

But there’s a whole other side of the city, too. I took a tour of the underground Prague, the remains of the old city going back to 1300 and even earlier. Apparently the current city has basically been built on top of the original city in an attempt to get the city above the flooding waters of the Vltava. As a result, many of the shops and bars and restaurants in the city look modern and nondescript from the outside — but then you get inside and descend to huge cellars that have been reclaimed and redone with the same sensibility that created the gorgeous old architecture elsewhere in town.

On the underground tour, you also learn of the rather morbid history of this area and how wonderful people have been to each other over the millennia. You hear of this saint, who was killed when he was six years old because he was Christian. And then you learn about that king who was murdered by his aunt, who also killed the queen and the queen’s kids. Then there’s guy who crafted the astronomical clock in the city center: it’s such a beautiful piece of exquisite craftsmanship that the powers that be burned out the guy’s eyes so he could never build another one. How’s that for an incentive plan?

And amid all this incredible inhumanity over eons there looms the shadow of the inhumanity that happened for most of the 20th century. Everywhere you go you can’t help but be haunted by the institutionalized oppression of the communist era: it leaps out at you precisely because it’s inconceivable that such a beautiful place with such an ornate look at every turn could have been beaten down by such a gray blandness. That such beauty survived such a relentless and lowest-common-denominator approach to life is a testament to an enduring spirit that the Czechs must have. Between Chamberlain’s betrayal in 1939 and the subsequent Nazi oppression, followed by 50 years of communist abuse, it’s a wonder that Prague is now considered “the new Paris.” But the Czechs are survivors; they have to be: being here in the middle of everything they’ve been run over countless times since humans have lived in Europe. And through it all they created (and preserved) what is the prettiest city I’ve ever seen.