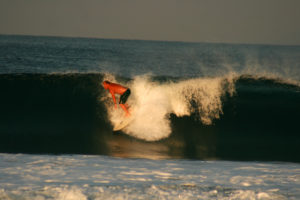 Sitting in the postage-stamp-sized aeropuerto in Puerto Escondido awaiting my flight out. After an hour-ish flight, I’ll connect in Mexico City and fly on to New York, where there’s currently a winter-weather advisory timed perfectly for my arrival. Great.

But what a way to finish up the trip. The last two days have seen ever smaller surf, but the waves enabled me to get my groove back. I got my takeoffs dialed in and with the added time, my feel for the break at Zicatela improved. And then today, the first taste of a new swell that’s supposed to get bigger arrived, and the combination of fabled waves and me having my shit together made for a wonderful morning. 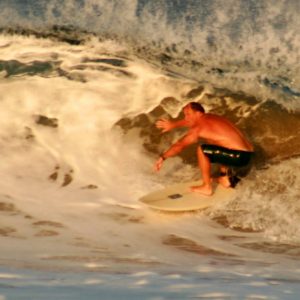 The lip of the first wave I caught clipped me on the head as I tucked for the tube but it was there. A fraction of an inch and I’d have been dialed. But the second wave…

Clean takeoff and drop, bottom turn, pull up a tad and tuck, and let it riiiiiiiiide. Without question one of the very best barrels I’ve ever had in my life and quite possibly the best since I’m having a hard time recalling others like this. I shot out of the tube and turned up the face that was now feathering and launched out over the back. As I paddled back out, another surfer was smiling at me and giving me the “okay” sign with his fingers. He said to me, “I was paddling out just looking into a barrel and all of a sudden you came out of it.” To top it off, after I got out of the water, a guy who I’d seen parked under an umbrella shooting photos with a long lens came over and introduced himself. Miguel showed me a shot from that wave on the back of his camera — there’s proof! I gave him my email and we’re going to connect, I hope.

I got a few other waves this morning but none like that. The conditions, however, were perfect: head-high-plus, glassy offshore winds, hollow tubes. Yes, many would close out but when you lucked into one that didn’t, the result was euphoria.

So…successful reconnaissance mission. I’m sorry to be leaving but it’s time to take care of some business back home. I can definitely see coming back to Puerto Escondido someday for a longer — much longer — visit. And in the next post (which I’ll start in a moment; I’m just now deciding to break this up into two entries) I’ll give an overview — my two cents, as it were — of the scene here in Puerto. Stay tuned.

2 thoughts on “Last Day in Puerto”