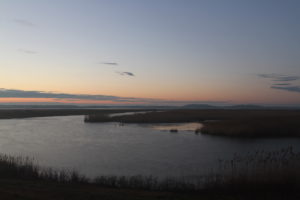 Late yesterday afternoon I visited what I consider to be the crown jewel of Plum Island: the Parker River National Wildlife Refuge. It’s a wonderful place. Magical, even, when you consider how close it is to the urban sprawl of metropolitan Boston. And the peace and calm of this oasis is even more pronounced on a cold day in mid-December when there are only a handful of people in the entire seven-mile stretch of island and none at all on the trail one chooses to walk.

Every time I visit the Hellcat Swamp trail I remember back to a time when I was six, maybe seven, years old and I walked this boardwalk path through the marsh and dunes of primal Plum Island with my father. He and I came to the observation blind that overlooks the freshwater marsh and sat for a few moments while we peered through the gaps in the blind’s camouflaged walls. We hadn’t been there long when — WHOOSH! — an osprey blew past us in a blur, no more than a handful of feet away from my wide, young eyes. To this day I swear I heard the roar of a jet engine powering the bird as it arced low over the water. 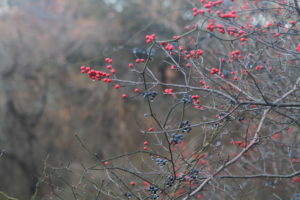 It left an impression, obviously, and as I stood in the blind yesterday recalling that moment once again it segued to other, similar moments of such energizing joy: powder runs in the Utah backcountry with my dog, Spooner; hiking with Spooner in the then-secluded canyons of southern Utah; on the lookout for grizzly bears along a salmon-choked river at the remote end of Kodiak Island; seeing white-tailed deer bound away from me while wandering the woods on Clausland Mountain in New York, not 25 miles from Manhattan; and banding ducks at dawn with a refuge researcher when I was about 8 or 9.

The memories prompted an inner (and slight outer) smile, but they also prompted remorse — remorse at how distant those moments had become. It was less a distance of time (even for those memories from when I was really young) than it was a distance of lifestyle. I realized that over the course of the past couple of decades I’d slowly been domesticated. Not that there was anything wrong with enjoying good food and comfort and a nice home, but I realized that I was truly happiest in my life when I was out there on the hard edge. And while some easing is natural, there’s no reason I can’t get back to living a life more outdoors — away from desks and office chairs and the internet. Instead of reading others who chronicle and photograph those things I used to do, I can get back to doing and chronicling and photographing those things (or at least some of them) again like I used to, and before it’s too late.

So I’d come to the refuge with my camera, a piece of equipment that in my younger days used to prompt many of my adventures. Back then I sought to be a new version of Galen Rowell, photographing the “art of adventure” (as his book is titled). I never got remotely close to his talent and vision, but at least the quest led to many of the fun times of my life. And I got a few good shots along the way.

I was hoping to get a shot or t 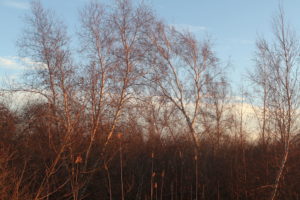 wo of the lovely, late-afternoon light of Plum Island in early winter. It’s a unique light, and November and December sunsets at Plum Island are the best I’ve ever seen anywhere. Really. The shades of red, purple, magenta, pink and blue sneak their way into your vision, wrapping around your psyche like a warm blanket in the cold air and making you feel comfortable, safe, at home.

Yesterday, a clearing storm made for a layer of cloudiness that cleared not long before the 4:15 p.m. sunset, and once the sun dropped below that ceiling, the light got interesting. It didn’t last long — the gap between ceiling and horizon was just a handful of minutes — but the warm glow on the trees and marsh plants promised that the storm was indeed over. The almost-full moon rose over the dunes and a harrier glided slowly over the frozen marsh. I snapped a few photos and savored the twilight and headed home.

And it was upon returning home that I learned that a guy I knew when I lived in Idaho had died in an avalanche a day earlier. Chris died while skiing the Montana backcountry near Yellowstone National Park. He knew the risks from having lived a life full of adventure such as backcountry skiing and commercial fishing in Alaska. And while I’ve always called bullshit when people say, “Oh, at least he died doing what he loved” — bullshit…he’s dead and won’t get to do that thing he loves anymore — Chris’ passing pointed up that at least he was still living a life full of that energizing joy I had once known. It was to that notion that I toasted Chris last night. That, and the realization that the universe will slap you in the face when it wants to get your attention.