“There’s never a moment when you can’t change your life.” I read that in some self-help book or blog at some point and it stuck with me. I mean: it’s true. We really CAN change our life any damned time we please. Just…do something different.

And so it is with my wearing of facial hair. (What? You thought this was going to be some kind of serious post?! C’mon! This is ME we’re talkin’ about!) Each winter I wake up one morning and think, “Ahh, to hell with it. I ain’t shaving. Think I’ll grow my beard again.” And so I do. In about a week I reach the point where my face doesn’t look like I simply haven’t washed, and in about a month it’s a full-on beard. In recent years I’ve chosen to keep my beard fairly well-trimmed, not at all like I did when I was living the ski-bum lifestyle when my then-girlfriend got angry and told me, “You look like a homeless person!”

I grew a beard most winters when I lived in Utah, Montana, Idaho and Alaska, but it didn’t really fit when I lived in San Diego. Just too damned warm and sunny all the time. (I know: oh, the burden of SoCal weather!) And I’ve done it since I’ve been back here in New England, it’s just that in recent years the damned thing is a heck of a lot grayer than it used to be. And while the gray doesn’t bother me in and of itself, it sure isn’t conducive to an active social life.

But this year, I just haven’t really cared — about the gray or about my social life. Or about a whole lot else, to be honest. It’s been a messed-up winter, and letting my facial hair grow out was less a style statement than an act of laziness.

My messed-up winter actually began in late autumn. While stretching out before hockey one evening — something I’ve always been vigilant about — I felt a little twinge in my groin muscle. No big deal; happens a lot in hockey where the skating motion requires all of your leg muscles to work hard. I kept stretching as I continued to skate over the coming weeks and the niggling muscle strain never went away. And then, one day in early December, I lunged for a loose puck and felt the muscle completely let go. The next morning, swinging my legs out of bed, I could feel the ache in my groin, my hip and my abs.

So I shut everything down in December: no skating, no surfing, nothing. I tried one yoga class thinking it might help but that was futile. Attempts to stretch even a little made my whole core ache. And little things — swinging out of bed, using my knee to hold the steering wheel while driving — hurt from my leg to my abdominal area. Something was NOT right, so much so that I started going to dark places in my head and, man, that’s never a good thing.

You’re saying: “why didn’t you go see a doctor, you dummy?!” Well, being self- or unemployed depending on the week, my insurance is through the state and, well, it sucks. My research suggested I had a sports hernia and surgery wasn’t an option financially so what was the point in paying a ton of money to hear some doctor tell me, “Rest it and give it time.” I could do that myself…which I did, just in time for the holiday eating and drinking to add quite a few pounds to my belly. Awesome!

I resumed skating in January, using a tight wrap on my upper leg and popping ibuprofen after each session. And the thing was, I actually felt better AFTER skating, most days. It’d still twinge a bit now and then, but nothing too bad. I’ve resumed surfing and am slowly adding body-weight exercises to my regimen. I don’t hurt getting out of bed anymore and I did, finally, see a doctor who told me not to go to those dark places in my head anymore, that it was just a muscular injury.

I’ve broken multiple bones, I’ve had knee surgery, I’ve had more stitches than I can count, but this injury has been, without question, the worst physical ailment of my life. For three-plus months I was reminded every single day by my body that I was not 100 percent. And it was going to be a while before I got back to 100 percent. It infringed on every aspect of my life and it sucked.

On top of all this physical BS was the gloom of the dark New England winter, the despair-inducing experience that is looking for a job in your 50s and the whole dealing-with-the-house bullshit that arose back in the fall. So letting my beard grow out was just a physical manifestation of the “why the f*$% not?!” mindset into which I’d fallen.

But as that self-help person pointed out, EVERY SINGLE MOMENT we can change things for the better. And that moment finally arose for me.

I started with getting back on the ice and back in the water. And now I’m continuing the process with the decision to go clean-shaven once again. In reality, it’s not THAT grandiose a notion.

The flip side of that morning when I decide to grow a beard arrives in late winter when I wake up and think, “Ahh, to hell with it. Think I’ll shave.” That day was today and…voila! 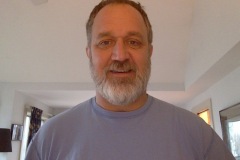 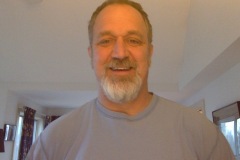 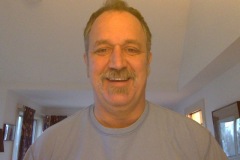 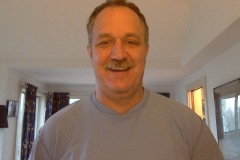 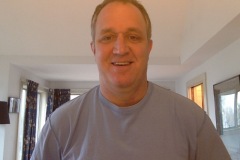 And as I’ve done when I’ve shaved off my beard in years past, I figured I’d have some fun along the way…which is what I’ve chronicled here. Hope you get as big a kick out of the various looks as I did. And one of these years, I swear I’m gonna do the Amish/Brigham Young thing of the beard-along-the-jawline look. That’d be HAWT, don’tcha think?!

Oh, and you can take to the bank the following two things: One, as soon as I finished, I looked in the mirror and thought, “Damn, I think I like me better with the beard.” And two, it WILL get cold and snowy sometime in the next few days.