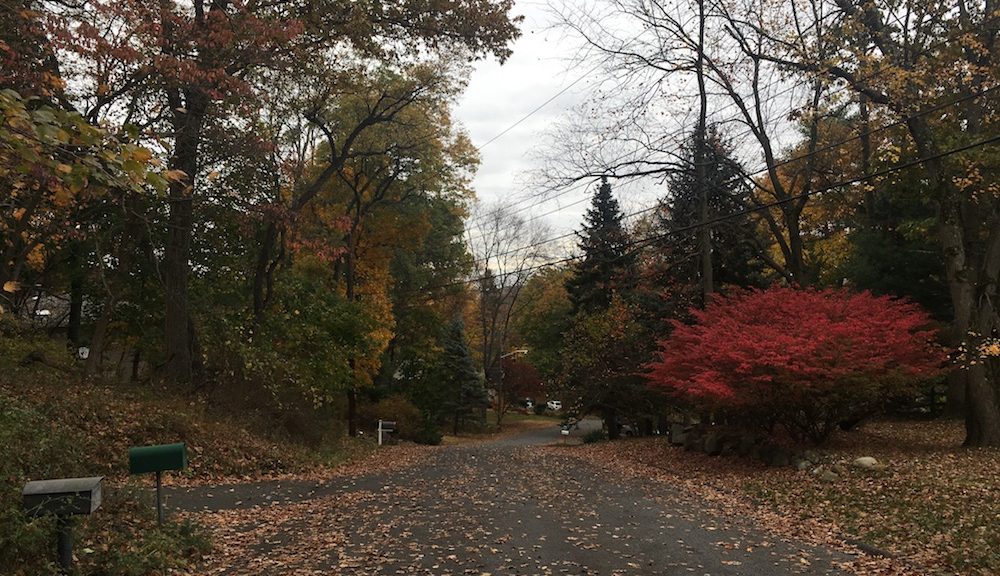 My home is Plum Island, Massachusetts. I’ve asserted that since I was about 10 or 11 years old. But the reality is: Plum Island started out as a summer house. My father, who grew up in Medford, Mass., started visiting the island when he was a boy in the 1920s and I first visited in 1965 when I was still in my mother’s womb. My folks bought the house my brother and I now live in back in 1972, when I was 6 years old.

And while I consider Plum Island my home, the fact is that my early years were largely spent in Orangeburg, New York, a hamlet just outside New York City. Orangeburg is in Rockland County, on the west side of the Hudson River, just north of the New Jersey border.

With the maturity (ha!) of age has come the realization that it was an amazing place to grow up. Despite being just 20 miles from Manhattan, I lived in a forest with deer and all kinds of critters running around. We had trails to roam and creeks to wade in, and there were foundations and wells scattered throughout the woods that dated back to when the Dutch first got to the area in the 1600s. Really. And in addition to this rural playground, we had the Big Apple within easy bus range.

How did my Dad, a guy from Medford, Mass., end up in Rockland County? Simple: World War II. Orangeburg was home to Camp Shanks, the largest embarkation point for troops headed to Europe. Dad moved through Camp Shanks en route to Europe and on his way back from the war. When he graduated from Dartmouth and attended Columbia Journalism School on the G.I. Bill, Dad and his first wife settled into veteran’s housing at what had become known as Shanks Village.

Despite being a Bostonian, Dad was of the mind about New York City that, as Sinatra sang, “If you can make it there…” (though Dad ALWAYS preferred Liza Minelli’s version of the song from the movie, but that’s a different story), so he was staying in New York and making his career there. He and a handful of other vets who were also living at Shanks Village found a plot of land at the base of nearby Clausland Mountain. (If you’ve ever driven across the Tappan Zee Bridge, Clausland is the mountain that forms the western shore of the Hudson River.) Dad and his cronies platted out a dead-end street — laid out such that the top of the road ran into a grade too steep to go any farther — and built eight homes, one for each family.

Ours was at the top on the right-hand side. We had no one behind us to the summit of the mountain (on which sat an Army Nike-missile-guidance station, this being the height of the Cold War) and a view from the living room that included the tallest buildings of the Manhattan skyline. We could see the lights on the Empire State Building and I grew up watching the World Trade Center rise in a stutter-step pattern above the New Jersey forests between our house and the city. We raised damn near every domesticated animal there is — chickens, ducks, geese, dogs, cats, horses, rabbits and more — and yet we went to movie premieres at the big theaters in midtown Manhattan (thanks, Mom!).

Like I say, it really was an amazing place to grow up, but I’ve pooh-poohed it for decades in my New England snobbery. I mean: Dad was from Boston and Mom from New York…my sister was hanging out in NYC as soon as she was a teenager, while my folks and I had worked it out that, had I not gone to prep school I was going to live with neighbors and attend school (and play hockey) in Massachusetts. Guess who got whose blood?!

All of this is a long-winded introduction to the point of this post: I’d not been back to Orangeburg in many, many years — until yesterday. And the result was a surprising (to me, anyway) clench in the chest and even a slight tearing up at the corner of the eye.

I was driving home to Plum Island from Maryland, and rather than cross the Hudson River at the George Washington Bridge I turned north and rolled up the Palisades Parkway.

The Palisades Interstate Parkway is a lovely, cars-only thoroughfare that Rockefeller and other wealthy folks donated way back when. It runs along the crest of its namesake cliffs and overlooks the Hudson, New York City and out toward Long Island, before turning away from the river at the town of Palisades and running north to Bear Mountain and West Point. My parents commuted on the P.I.P. every damned day seemingly forever, and I rode and drove it tons of times myself. But driving it yesterday I was reminded of just how lovely a drive it is. Forests, grand vistas, no billboards or buildings — it’s a civilized way to travel via automobile.

I left the parkway at exit 5 onto Route 303 right by the old 303 Drive-In Theater (now a flea market) and north past the former site of Orangeburg Pipe (now a mall). (Sidenote: Musbro Kennels is STILL there, though the Wedge Deli is long gone.) The Orangeburg Library is still at the corner of 303 and 340, and is now part of the Camp Shanks Museum (to which my father donated a bunch of stuff). Turning right onto Kings Highway, the old stone house (dates back to the 1700s and was a little local museum when I was a kid) is still a restaurant. The phone company and the comic-book factory (now some other company) are still there. And the creek still runs alongside the road before crossing underneath and heading onto the campus of St. Thomas Aquinas College.

The turn onto Kingswood Drive was pretty much the same. The families are all changed — I believe with my father’s passing last year all of the originals are now gone — but the houses are mostly the same. The Ulrichs’ house is identical; the Landreths’ has a big fence with a loud dog behind it. The Lunds’ house is completely different, but the Wallachs’ and Les Thompson’s and the Markalouses’ all looked like they did when I was walking up and down that hill each day to catch the bus to school. The Gwilliams’ house is basically the same, though where the pool was is now a forest of small trees and weeds. But in the woods just above their home (but below Marty Pizza’s house), the tree that fell during a storm when I was 8 or 9, and in which Neil Gwilliam and my brother, Scott, and I built a series of forts, is still there, if quite a bit disintegrated now.

And my house is…the same. Mostly. I didn’t drive up the steep driveway (GREAT sledding in winter and down which Scotty rode his Big Wheel once while barefoot, resulting in a slam into the Gwilliams’ rock wall on the other side of the street) but it’s still the same shade of red my parents painted it. Hell, the mailbox is still the green my father painted it 20 or more years ago and it still reads “7” and “Smith.” There was a guy raking leaves in the front yard — dropped by the same huge oak tree that is still there but has had one major branch cut off — and throwing them off the edge of the level ground, just as I’d done countless times as a kid.

I stayed for just a few minutes and then continued on, east along Kings Highway past Rockland Cemetery (resting place of my childhood friend Neil Gwilliam, who passed away late in his freshman year at Brigham Young University, and also John C. Fremont who expected it to become the national cemetery), past Lawrence Park Apartments (home of many of my elementary school classmates) and onto Route 9W north to the now-new Tappan Zee Bridge (which is a stunning piece of architecture and engineering).

Before I left, while standing next to my mailbox taking it all in, a car came barreling up Kingswood Drive. It slowed as I stepped out of the road and a woman asked out her open window, “Are you lost?”
“Nope,” I replied, smiling.
She looked a little wary but nodded and rolled past before I could say anything more. She turned into the Gwilliams’ driveway, where she parked and went into her home. I got into my car and drove to mine.

One thought on “Detour Down Memory Lane”