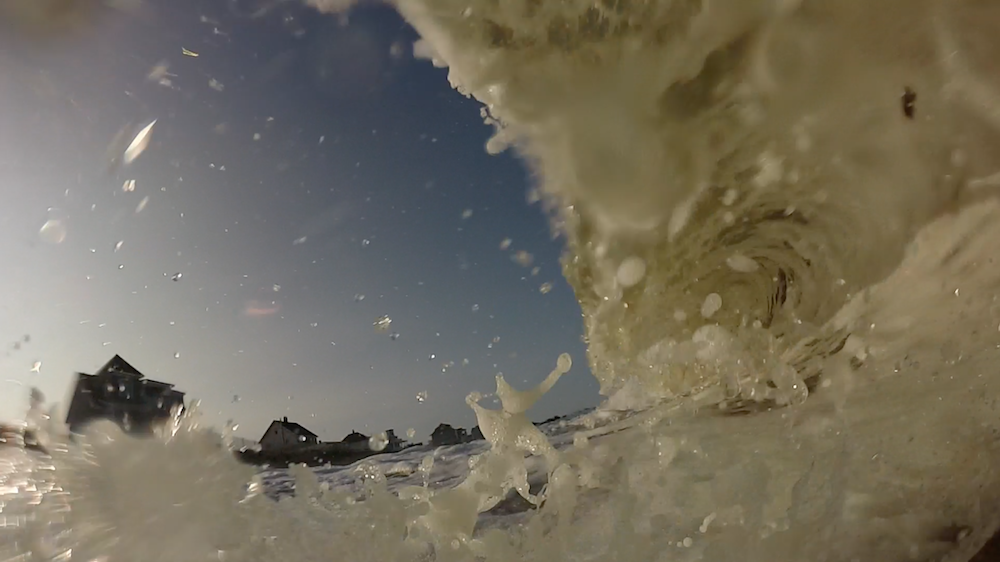 Living all winter in Annapolis as I did meant I didn’t get to surf for a good eight months or so. Like: zero times. None. I had hoped to shoot down to Cape Hatteras for a few days of surfing and kiting, but when January’s cold snap killed my trusty, old Subaru with 212,000 miles on it, well, those plans kinda went down the drain.

As a result, along with my longing to sail on the ocean this summer was an equally strong longing to surf on the ocean once again. Of course, New England in August is not exactly a hotbed for waves, but I did manage to get out on a longboard for an hour just a few days after my return. Which, in the words of Carl Spackler, is nice.

Since then, however…nada. And just like when I was a younger man going crazy during the long, New England summer flat spell, I’ve been kinda jonesing for surf lately. Jonesing so much, in fact, that after the recent northeast winds had kicked up some lumpy bumps on the ocean resembling waves, I resorted to a truly desperate measure: I broke out the handplane I bought a few years ago and launched myself into some high-tide shorebreak.

When I was younger and more supple, waves like yesterday’s would send me “body whomping”: I’d bodysurf the waves as they broke onto the shore, tumbling me ass over teakettle, sometimes onto bare sand. Seriously. How I never broke my neck surprises me to this day.

Yesterday’s waves weren’t nearly as big and gnarly as some I charged when I a kid. Still, some of them broke pretty hard on the beach and I was a little more wary than I use to be.

The handplane helped a bit, I think, but it was the swim fins I wore that really helped get me into waves. More important than just getting into the waves, the thrust the fins enabled me to launch me into the waves before they broke, so I could (at least try to) angle down the line a little, not unlike if I’d been surfing on a board.

And one of the cool things about my handplane is that it has a GoPro mount on the nose. And with a camera securely in place on the board, I went for it, hoping to get some in-the-barrel video of the Plum Island shorebreak.

Well, it kinda-sorta worked. Mostly, I got my ass kicked, leaving me bouncing and swirling around ankle-deep water on the steep beach as the next wave bore down on my helpless self. And all the time I had a big, wide grin on my face, laughing like the little kid I could remember being.

The video came out not-so-great, but I did find a couple of screen grabs that look kinda cool. And I added this selfie video for kicks. So here it is: the view from inside the Plum Island shorebreak. Next time, c’mon out and join me.