Up and on the road in the pre-dawn darkness this morning…dark even though it was already 7am. Daylight is gettin’ scarce above 60 degrees and there are still two months to go until the solstice. Lock away those firearms, folks!

In the past two days I’ve driven most of the Alaska Highway (that main stretch, the run south of Watson Lake, Yukon, for the first time since July 1992). And after fifteen hundred miles I’ve come to a conclusion: the Alaska Highway is no longer a wilderness road. It is now a fully modern road that just happens to be in the wilderness.

As an example: I was able to cover 852 miles from Whitehorse to just short of the end of the highway itself in a day — and that included an hour’s interlude at Liard Hot Springs and a 15-minute construction delay. While I may or may not have exceeded the speed limit today, I got my doors blown off by a few people who were absolutely rollin’. And we all could have gone faster — the road is, for the most part, that solid. Fact: from Destruction Bay on Kluane Lake to where the road enters the Rockies just east of Liard Hot Springs, the Alaska Highway is bomber: well-built, solid, wide, safe. Sure, conditions — snow, ice, fog, wildlife nearby, etc. — can conspire to slow a drive down, but the windy, twisty, half-dirt, steep roadway of old — the one I remember from 1992 — is gone. Yes, from Destruction Bay west to the Alaska border there are frost heaves that will jar the fillings loose from your teeth. And yes, from Liard up and over the Rockies, it’s a windy, twisty drive that demands your attention. But other than those stretches, it’s a set-the-cruise-control-and-go drive with spectacular vistas.

And that’s what I did. This was not a journey — I’m not looking for any life-altering epiphanies this week. It’s not even a vacation or a photo expedition. This is a trip, plain and simple. As in: transportation. Moving from one place to another. And to that end, speed — while enjoying those spectacular vistas — is the name of the game.

Speaking of photos: I’d like to apologize for mine. Between my trusty, old little digital — which is about to give up the ghost — and me not bothering to slow down or do anything else to optimize a shot, the photos I’ve included here are just quick glimpses of what I’m seeing. And while I’d love to come back and get those eye-popping shots someday, there’s really only one lens that does justice to the vistas one can see from the Alaska Highway in places like the Yukon: the human eye. Nothing mechanical can adequately convey the sizes and distances here. It’s truly mind-blowing.

And since the road isn’t such a big deal anymore, you should make the trip someday.

PS: Liard Hot Springs…the pool all to myself…ahhhhh!
PPS: BIG jump in the critter count today: bison, caribou, moose (of course), stone sheep, a red fox…and the all-too-brief highlight of the trip: a wolf. Jet-black, bigger than Spooner but more lithe…gorgeous. Of course, when I spun around to get a closer look, he evaporated into the trees. 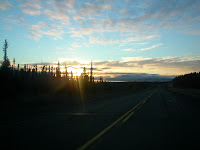 Morning in the Yukon 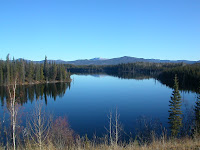 Yawn…just another roadside vista in northern BC 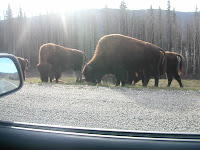 Bison beside the road, northern BC 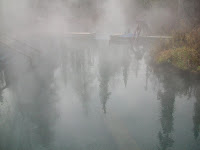 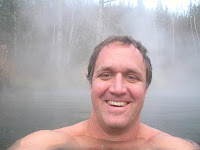 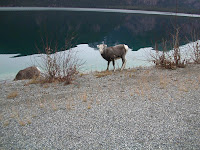 Sheep foraging along Muncho Lake, BC 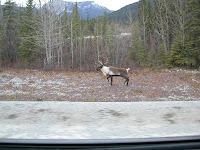 Caribou, near Muncho Lake, BC