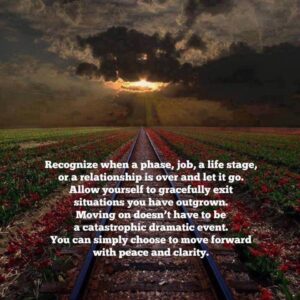 No, not THE end. If there were a nihilist in me, he might say THE end is always near but that’s a tad too Big Lebowski for a Tuesday morning. No, what I’m talking about is an end to several threads in my family’s life, and one big thread in mine.

As I chronicled in my previous post (Yikes! It’s been a while: all the way back in late August), I was unable to save — and stay in — the family home. And in fact, when my brother and I listed the home, it went in no time at all: listed on a Friday in September, hosted appointment-only showings (no open house) on Sunday, had several offers that evening and accepted one for well above asking price on Monday. Boom. Done.

The closing was scheduled for Nov. 6 — I said it either had to be by early October or after the Nov. 3 election. I chose those dates so that I could register in wherever I’d be moving to or I could simply vote here in my hometown. The buyers chose the latter, which was fine by me because that gave me more time — time to both savor my favorite season in my favorite place as well as pack everything up and go.

Well, it turns out there was some paperwork my mother had drawn up back in the ‘90s that I knew nothing about, and that once I did know about it assumed would be no problem as a result of the paperwork she and my father drew up in 2007. As if to verify Shakespeare’s centuries-old adage, %$#%@ lawyers felt otherwise. Specifically: the buyers’ %$#%@ title lawyer. Several other %$#%@ lawyers, including some high-falutin’ %$#%@ attorneys in Boston, thought differently but to no avail.

So I wound up having to track down an old friend of my father’s. He lives in New Jersey and hadn’t spoken to my father since around 2000. He was unaware that my dad had passed away four-plus years ago. But I found him, thanks to a long-time family friend, and that meant we didn’t have to go to court to deal with this bullshit. It did mean we had to get my sister’s signature on some paperwork — never mind that my brother and I bought her share of the house in 2016 and had that documentation here in Massachusetts (see above re: %$#%@ lawyers).

The problem was that Brooke was in Vancouver, Canada, filming a new TV show, and that meant visiting the American consulate to get a notary signature. Or maybe, just maybe (the %$#%@ lawyers weren’t sure), the Canadian version of a notary would suffice. Brooke, thank goodness, got the documents and found a Canadian notary, and did as they required. That meant waiting another two days for authentication, which she did. She promptly sent the signed and authenticated documents via FedEx overnight to the %$#%@ lawyers.

The problem THERE was that cross-border shipping, even for just papers and even when sent via FedEx overnight, had been said to take up a couple of weeks. One of the %$#%@ lawyers said he’d had some documents sent overnight from Montreal and they’d taken 18 days; Brooke had some eyeglasses shipped to her in Vancouver and they’d taken 30.

Well, Brooke dropped the stuff with FedEx (Who’s old enough to remember their original motto: “When it absolutely, positively has to be there overnight”?) last Friday, Nov. 13, a week after the originally scheduled closing. She sent along the tracking number which I checked Saturday morning and, glory be, the package was already in nearby Portsmouth, N.H., with a scheduled delivery Monday morning. Glory be! So at least THAT part worked out well.

That was yesterday. It’s now looking like the closing will take place this Thursday or Friday. I’ll need a day or so to finish up here: having the electricity shut off, getting my bed and the few kitchen items I’m still using to cook to storage, and then sweeping up. Where to then, well, that’s still TBD, and grist for a later (today) post.

The house is pretty much empty otherwise, and let me tell you: living in an empty house sucks. Especially a house that has been your spiritual home for almost 50 years and an island on which my family’s presence dates back at least 90 years. I have photos of my 6-year-old father on the beach during the summer of 1930, and I can only assume his parents came to Plum Island before that since they were poor, so I can’t imagine they made what was then a not-insignificant journey just on a whim. That line is now severed. Permanently? I don’t know. I kinda hope that in a couple of years I can find a small, old cottage — like the kind this house used to be — and it will be affordable enough for me to buy it and settle in for the duration. I guess we’ll see.

I get choked up every now and then, but by and large I’m mostly numb to it. “What’s done is done,” I say. And it’s a very first-world problem to face. I’m not facing a second major hurricane in less than two weeks and I’m not being persecuted or killed by cops because of my skin color. But it still hurts.

And then, a couple of days ago, a friend posted the image I’ve attached to this lament. And it helped me remember that change IS the only constant, and that I need to embrace it, not be sad and fearful. So that’s how I’m choosing to take it all. At least I’m trying to take it all that way. And I’m sure I’ll be crying as I drive over the bridge and off Plum Island at the end of this week.